Gadgets That Have Changed Our Lives

Greetings. Time magazine has just come out with its list of “The 50 Most Influential Gadgets of All Time” and it is definitely a blast from the past (and present). It is also a really fun way to think about innovations that have shaped our lives and changed the way that we connect, explore, listen, picture, learn, play, make, share, and entertain ourselves.

As you go through the article and the gadgets and their brief histories, try to think about why each of these inventions generated so much interest and what lessons they offer in how you and your colleagues can create even greater interest and value in the products, services, and solutions you offer. Then imagine how some of the most recent gadgets, especially those that deal with connecting and educating people, might be used to enhance your work and build an even stronger bond with your customers, team members, and stakeholders. 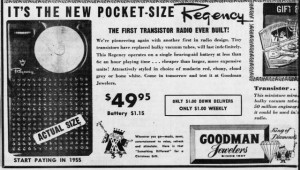 But most importantly, have fun taking a stroll through this brief history of every day technology.

And in case you are pressed for time, here are the Top Ten…

Let’s just say that this is the only item on Time’s list that is not always intended for children of all ages.

The device that changed the way a new generation consumed music and made Apple and the iTunes Store the world’s biggest music retailer.

Talk about a revolution, Kodak put photography within everyone’s grasp 116 years ago when it made it possible for the world to capture and share the moments of our lives.

It is fun to think back to countless evenings as a child when I fell asleep listening to San Francisco Giants and Oakland A’s baseball games with my transistor radio under my pillow. It is also fun to think about how we tell our kids today to put away their slightly more versatile electronic devices and go to sleep.

While the phonograph was invented in 1877, the Victrola was the first record player to bring classical music and opera to homes around the U.S. and the world.

Remember the day when almost everyone had an IBM PC or an “IBM Compatible” computer running the DOS operating system? And to think it wasn’t that long ago!

I fondly recall having my first Walkman at the University of Michigan and delighting in my ability to take my music anywhere, in multiples of twelve songs. All by the same artist. I was literally a party waiting to happen! I also fondly recall trying to explain to our kids who have grown up in the digital age, why this large, limited, and somewhat lame gadget was so cool and revolutionary.

Bold, brash, intuitive, and launched with much fanfare and symbolism in 1984. While it might not have been what George Orwell intended, the first Mac would begin to reframe our connection to “thinking” machines.

While it wasn’t the first TV or the first color TV, the Trinitron would raise the state-of-the-art in televisions and establish Sony’s place as a global leader in consumer technology.

And Number One is…

An elegant and user-friendly device that would revolutionize our notion of phones and smart phones, and that today places more apps and more computing power in the palm of our hands than a major university computer center did when I was going to college.

It is an intriguing list and an interesting lesson in modern history. And except for missing the waffle iron, twist top bottle, nose hair trimmer, and Popeil’s “Pocket Fisherman,” I would have to say that the folks at Time are pretty spot on in capturing the gadgets that have shaped our lives.