The Magic of Stepping Back in Time

Greetings. Ideas and inspiration often come from unusual sources. Like a warehouse filled with old furniture and memories. And this was exactly the case not long ago when our daughter Sara went searching for a few items to furnish her new apartment. In her search she came upon an old stamp album, published in 1928, and belonging to a gentleman from Westfield, Massachusetts, named Edward Pomeroy. 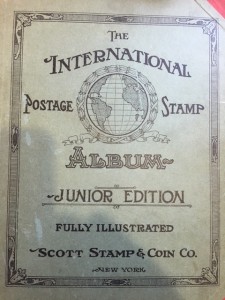 Now I should probably backtrack as some readers might not know that I am an avid and enthusiastic stamp collector, or “philatelist,” and have always viewed stamps as wonderful little journeys into the lives, cultures, histories, and geographies of other places and people. In fact, a few years ago I wrote a blog post suggesting that the world might actually be a better and more understanding place if its leaders collected stamps and in the process gained greater insight about other countries. So finding an old album filled with lots of intriguing stamps from around the world was a source of real delight.

But back to Edward Pomeroy who it seems was the secretary of a local stamp club and, as such, left in his album a wide variety of handwritten notes, news clippings, and meeting minutes describing the workings of the club, stamps and topics that were of particular interest, presentations made by various members about their interests and expertise, and an explanation of the club’s 10 cent monthly dues.

And while I found all of this fascinating, one note was especially remarkable. It explained how Edward was able to send himself a letter that flew on the Graf Zeppelin’s maiden flight to the United States. The note read:

“For the Graf Zeppelin I had to send (my letter) to the Postmaster of New York City asking him to put it on a boat in time to reach Fredrichshafen by April 18, 1930. After reaching Germany it was put on the ‘Graf’ which went from Germany to Brazil then to United States which was delivered to me day after.”

And in his letter, adorned with a $2.60 Graf Zeppelin stamp, he enclosed the postcard pictured below that read:

Words that strike at the heart of what it means to be human. Words that underscore the central challenge in all of our efforts to create organizations and cultures that consistently learn, grow, and innovate. Words that, in 1930, literally flew across the Atlantic as part of a history making voyage when the world of commercial aviation was in its early, daring, and formative years. And words that might have been lost in the dust of an old building had Sara not discovered Mr. Pomeroy’s stamp album and a small part of his life.

One more powerful reminder of the power of curiosity and the potential to find ideas and inspiration in the most unexpected places. 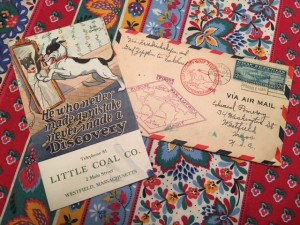 We win in business and in life when we wander through old warehouses and age old lessons about innovation, progress, and community.