Greetings. Back from Malaysia just in time for the latest big DC snowstorm. Quite a contrast with the nearly consistent 92 degree temperatures for eleven straight days in Kuala Lumpur. And just like the weather, I went on my first visit to “KL” with a sense that many things would be very different from home only to discover a lot of very interesting similarities. I guess this shouldn’t be a big surprise. After all, people are people and we have a lot more in common with the residents of a Muslim and developing country halfway around the world than most of us ever choose to imagine.

So here are a few impressions from my trip to Malaysia with more ideas (and hopefully a few insights) to follow. And given that I am a geographer by training, I will begin with an old map to give you a bit of context for its location in southeast Asia… 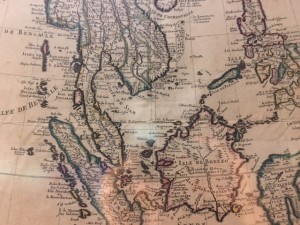 KL is a very modern and fast-growing city which means that the roads are great but the traffic is crazy. To give you a sense of the pace of growth, think about this… In 2010 the city had a population of about 4.5 million people. Today the number is roughly 7.5 million. And the projection for 2020 is over 10.0 million. And it seems everyone (or practically everyone) in KL has a car or a motorcycle that they drive really quickly on increasingly congested roads. Their cars of choice are Protons and Peroduas, especially the nearly ubiquitous and modestly adorable Myvi, which are manufactured in Malaysia and not subject to the high taxes imposed on imported vehicles. Not that there aren’t a lot of Toyotas, Hondas, VWs, Audis, Mercedes, BMWs, minivans, and occasional Bentleys and Ferraris on the road, but local cars are everywhere. And for those of us who think that traffic in Washington, L.A., New York, Chicago, or San Francisco is impossible, KL’s complex network of highways, toll roads, and daring motorcyclists all driving on the wrong side of the road is a sight to behold. 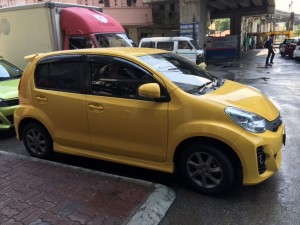 Walking is not the most popular way to get around even though it is typically much faster than being in a car. Granted, it is very hot and humid in KL and the weather can change from sunny to pouring rain in a matter of moments. But almost every time I asked someone for walking directions I was quickly asked if I “really wanted to walk there.” “Oh, I think it’s only about a mile away” I would reply. “Exactly. Wouldn’t you prefer to take a taxi?” And when I asked the concierge at my hotel for the best walking directions to the National Museum (a distance of about four miles), he shared that he had never known anyone who had walked there citing the distance, heat, and the danger of crossing several major roads in a place where pedestrians don’t exactly have the right of way. It is also interesting to note that people in KL seem to walk very slowly.

There are about a zillion shopping malls in KL and almost everyone loves going to them. Okay, there aren’t really a “zillion” shopping malls, but there are more shopping malls in KL than any other place I have visited and they are very popular. And they even include pyramids and concert halls. I’m not sure if most of the locals actually go to the malls to buy things, given that the nicest ones are filled with very expensive designer stores, but they certainly enjoy the experience of looking in all of the stores, being in air conditioning, and walking slowly.

The food in Malaysia is absolutely delicious…assuming you enjoy Asian food. Malaysia, and KL in particular, is a real melting pot of many cultures with the three biggest groups being Malay, Chinese, and Indian. As a result it is easy to find great Malaysian, Chinese, and Indian food along with some delightful fusions among them. My favorite dish, recommended by many of the locals, was fish head curry…an addictive blend of fish heads, eggplant, okra, peppers, tamarind, laksa leaves, sugar, mint, and a bunch of other stuff that was awesome on blue rice. But I also enjoyed other wonderful coconut-based curries, chapatis filled with the most amazing cauliflower, spinach, cabbage, chickpeas, beans, and lentils, dim sum, Cantonese specialties, and lots of spicy and not-so spicy noodle dishes. And while I found the local food to be remarkable, I must also share that McDonald’s, Burger King, Starbuck’s, Subway, and especially KFC are super popular with Malaysians who seem to have a real passion for fast food and fried chicken. 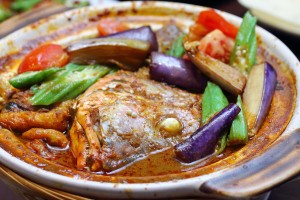 People are really friendly. Not in a super outgoing way, but I consistently found that people in KL were courteous and eager to be helpful whenever I approached them. And most were quite curious about me, where I came from, and why I was there. Granted, I have almost always found that people are nice when we are nice to them. But that should be obvious to anyone who travels far from home. And while most people in Malaysia speak English, even folks who didn’t speak English were glad to help. On one of my many walks through the city I happened to get lost or should I say very lost…which is something that is difficult for a man, and especially a man trained as a geographer to admit. (If I have an excuse, or rather an explanation, it is that I kept discovering fascinating places that took me farther from my destination and my map). In any event, I found myself in a place that very few tourists have ever found themselves in only to be aided by a very kind shopkeeper who motioned me to his car in a crowded back alley and eagerly drove me several miles across town to my intended destination. 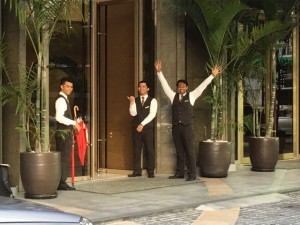 You can actually get a fish massage. You can also get a blind massage and a “super blind” massage. But I will have to try those on my next visit. Though my 15-minute foot massage, done in a pool filled with overly-enthusiastic fish, was definitely a unique and ticklish experience. I will spare you the pictures here as some readers might already be “grossed out” by the fish head curry, but feel free to email if you would like to see the video. 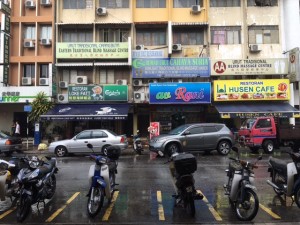 I never cease to be amazed and inspired by the privilege of travel. And by the chance to see the similarities and differences in people who live around the corner and around the world. As I have come to understand more clearly all the time, our similarities are the glue that connects us and our differences are the raw materials that allow us to stretch, grow, and innovate together.