It Ain’t Over Till It’s Over

Greetings. Lawrence Peter “Yogi” Berra, the revered American baseball player and accidental philosopher, died last week at the age of 90. Baseball fans will remember him for his remarkable career as a catcher for the New York Yankees during one of the sport’s golden eras…a career that included being named an All-Star 18 times and the American League’s Most Valuable Player three times, 14 World Series appearances, and 10 World Series titles. And many will say that on one of the greatest teams in sports history, and one packed with much bigger and more glamorous stars like Mickey Mantle, Roger Maris, and Whitey Ford, Berra was the real catalyst for the Yankees incredible success. 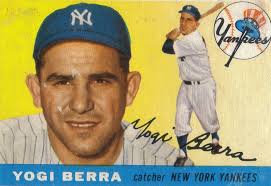 But baseball fans and non-fans will also remember him as an exceedingly likable guy with a rare gift for saying delightfully memorable phrases that rarely made sense and often spoke to the very nature of life and what it means to be human. Within the joyful absurdity of his “Yogi-isms” there seemed to lurk keen insight, not only for our personal lives but the lives of our companies and organizations.

Here are some of my favorites which I remembered fondly upon hearing of his passing:

It ain’t over till it’s over.

The future ain’t what it use to be.

When you come to a fork in the road, take it.

You’ve got to be very careful if you don’t know where you are going, because you might not get there.

You can observe a lot by just watching.

It ain’t the heat, it’s the humility.

No one goes there nowadays, it’s too crowded.

It was impossible to get a conversation going, everybody was talking too much.

Why buy good luggage? You only use it when you travel.

Baseball is 90 percent mental and the other half is physical.

Many of these have a valuable message for the challenges we often face in our collective work lives. And given the work that I do to help companies and teams explore and unlock genius in themselves and the world around them, I will always have a special connection with the notion that “You can observe a lot just by watching.” In fact, I am convinced that part of our challenge as adults and organizations is to do a better job of “watching,” paying attention, being present, and rediscovering how to be curious about all of the ideas, insights, and possibilities that we pass by every day but somehow fail to notice.

Words to live by from a slightly unusual business guru. And words that will hopefully be remembered for a long time to come. After all, “It ain’t over till it’s over.” And that’s a long time into the future from now.

We win in business and in life when we try to not take ourselves too seriously. And when we find joy and inspiration in crazy ideas that are filled with wisdom.