What Have You Done for Us Lately?

Greetings. I often find myself making lists as a useful way to understand complicated things or as a starting point for sorting out the pluses and minuses of new opportunities. And I’ve also found lists to be a helpful tool in setting priorities and, hopefully, getting the most important stuff done. 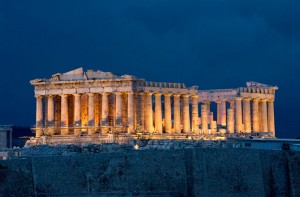 So amid the current debate about “bailing out” the Greek economy, I thought it might be fun to make a list titled “Greek Contributions to the World as We Know It” or as “I” have come to know it. A list that might put things in a bit more perspective as a world full of experts, economists, pundits, and comedians continue to debate the pluses and minuses of giving this once proud nation another chance to mend its modern economic ways. After all, it struck me as somewhat sad that one of the “cradles of civilization” was now viewed by most people as the poster child for economic irresponsibility and the birthplace of some really exceptional yogurt.

And here are the things I came up with:

Greek Contributions to the World as We Know It

– the concept of citizenship

– Socrates and the importance of asking important questions

– Plato and the value of idealism

– Aristotle and the basis for the scientific method

– theatre as well as tragedies and comedies

– innovations in art and especially sculpture

– Pythagoras and his theorem

– cartography and the first map of the world

– Hippocrates, his oath, and the foundations of modern medicine

– classical architecture and the Acropolis

– the gyro sandwich, moussaka, and spanakopita

– a beautiful setting for the movie version of “Mamma Mia”

So while I am not smart enough to know what kind of “bail out” the European Union (or the rest of us) should provide to Greece and its citizens, or what changes they should make to get their economy in order, I am pretty certain that we owe Greece a considerable debt of gratitude for many of the things we hold dear.

And I am also sure that Greece’s challenges have at least one important lesson for all of us in addition to reminding us of the value of living within our means. It is the powerful notion that we are all likely to be judged by what we have done for others lately. It’s a notion that suggests, in business at least, that we can never rest on our laurels (also an idea given to us by the Greeks) and that we must always be keenly focused on understanding and delivering the greatest possible value to those we have the privilege to serve. For while it is not entirely fair, it is the way that the world works…and at an ever faster pace.

We win in business and in life when we appreciate and honor those around us, even when they have hit a bit of a dry spell. And when we figure out how to enable them to once again innovate and rediscover their mojo (which, for all I know, might also have its roots in ancient Greece).

Cheers! (or should I say Opa!)