Getting “Out of the Box”

Greetings. While I am keen on the importance of strangers in our work and lives, I have a bit of an aversion to the popular notion of thinking “out-of-the-box” as the key to greater creativity and innovation. Yet it is still a widely-used phrase in companies and organizations that are trying to figure out how to think and act in new ways. My biggest concern is that too many businesses believe that simply calling for “out-of-the-box” ideas, often accompanied by a “suggestion box,” will create a veritable landslide of brilliance as employees suddenly feel liberated to suggest amazing possibilities for new products, services, solutions, customer experiences, and new ways of doing the things that matter most.

If only it were that simple.

As we all know, coming up with (and implementing) the right new ideas takes strategic focus, real discipline and commitment, curiosity, humility, a willingness to take calculated risks and make some mistakes, a sense of urgency, and a culture that is truly open to learning, fresh thinking, new perspectives, and the insights of people and places that are very different.

Having said this, and in the spirit of trying to be as open-minded as possible given that some things are just plain weird, I must admit that a recent feature in the New York Times challenged me to be a bit less critical of “out-of-the-box” thinking…or at least one particular example. The article in question was about a remarkable innovation in the world of funerals in which the star of the show (a.k.a., the “deceased”) is able to attend their own service in a favorite setting or pose. Settings that include sitting at the kitchen table surrounded by favorite possessions or important life symbols like a bottle of Jack Daniels, being dressed like Che Guevara with a cigar hand, sitting behind the steering wheel of an ambulance, sitting atop a favorite motorcycle, or standing up dressed as a boxer in the corner of a boxing ring.

Yes, even I must admit that this seems to represent a new and graphic way of getting “out of the box” (or out of a specific type of box).

According to the Times, this new approach to funerals first appeared in San Juan, Puerto Rico, and has now become increasingly popular in places like New Orleans…which doesn’t seem like a big surprise. And its growing popularity might even suggest a world of untapped creativity aimed at making us look as fantastic as possible until closing time. It even brought back memories of the passing of my favorite great uncle who had just returned to Boston after spending the winter in Florida. Upon seeing his tan self, one of his closest friends remarked: “The winter by the beach did him a world of good!” Not exactly. But as Billy Crystal use to say on Saturday Night Live, “It is better to look good than to feel good.” 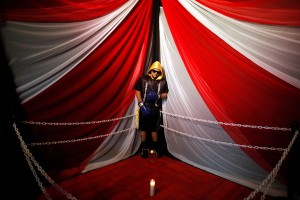 Which begs the question of how all of us might conspire to reinvent our industries in ways that get us out of the traditional context in which we offer value to our customers. And how we might do an even better job of customizing our offerings to the unique needs, desires, and personalities of those we have the privilege to serve so they can look as good as possible.

We win in business and in life when we seek to create greater meaning in our most important moments. And when we always try to look our very best.