Greetings. It turns out that reinventing the wheel or simply making a good thing a lot better is not so easy to do. Our companies often get a bit too comfortable with business as usual, and as customers we often get a bit too too comfortable with the products and services that we rely on. This thought came to mind yesterday as I drove past a La-Z-Boy furniture store, or should I say “gallery,” on my way to New York. After all, isn’t this brand synonymous with getting comfortable…having invented the reclining chair back in 1928? And somehow they have survived and adapted to a changing world by evolving their original ideas for comfortable seating in a relatively incremental way. Not that there’s anything wrong with that. One might even say that they have leveraged the fact that a growing number of us are becoming a bit lazier…even creating a chair with a built-in cooler in the armrest so that TV enthusiasts can enjoy a six-pack of beer without the inconvenience of having to get (their butts) up. Now if that isn’t innovation, I don’t know what is. 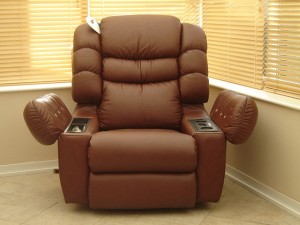 And other companies survive by making modest changes in their offerings. A while back I wrote about the stethoscope–a 200-hundred-year-old device that had not changed for 190 years until the folks at 3M Healthcare and Zargis Medical decided to attach a small digital computer to it and, in the process, transform its power as an even more valuable diagnostic tool. And how many of us are still driving cars with internal combustion engines? Or sending our kids to schools that are pretty similar to the ones we went to…give or take a bit of extra technology and a bit more “high stakes” testing? Or going to doctors’ offices where they continue to keep our records in almost mystical manila folders?

Which makes David Patrick’s creation even more remarkable because in his quest to make a more perfect skateboard he has literally reinvented the wheel. In fact, his new “SharkWheel” re-envisions the wheel (a 6,000 to 10,000-year-old invention with its likely origins in either Mesopotamia or China) as a set of cubes that produce a smoother, faster, and more friction-free ride. 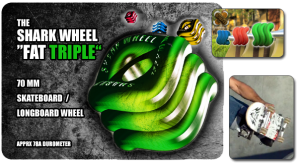 So if he can take on one of the most fundamental technologiess in human history, isn’t it time for you and your colleagues to reinvent your wheel as the key to innovation or simply remaining relevant and meaningful to the customers you have the privilege to serve? By creating the next generation of your product or service. By crafting a way more compelling and valuable customer experience. By using technology to rewrite your business equation. By figuring out how to be way more efficient and cost-effective in delivering your stuff. By making your customers much smarter and more capable.

We win in business when we challenge ourselves to reinvent the things that matter most. Sometimes by blowing them up completely, and other times by simply imagining how they could be even more compelling.