Learning From Things That Freak Us Out

Greetings. This summer the eastern United States will host a massive invasion of one of the most remarkable creatures on the planet. No, I’m not talking about humans though they are often pretty clever. The creatures in question are cicadas, those amazing and slightly pre-historic looking bugs who show up once every seventeen years looking for mates. Or should we say “singing” for mates. Talk about the antithesis of speed-dating. Yes these adorable insects sleep underground until they reach an age when most of their human counterparts have already learned to drive, then suddenly appear to serenade several billion suspecting females.

And their song is so compelling that researchers at the U.S. Navy Undersea Warfare Center have been studying cicadas for several years and trying to understand and copy their unique talent as a new and innovative way to enhance remote sensing underwater, communication between ships, and rescue operations at sea. It turns out that the ability of such small bodies to create such loud and effective sounds could provide a real breakthrough in the changing field of sonar.

As long as we aren’t “freaked out” first.

And they aren’t the only insects that we can learn from if we are willing to be more open and curious about the natural world around us. 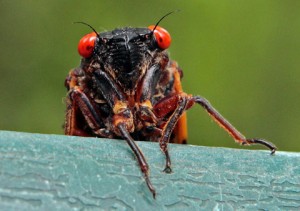 We win in business and in life when we are open to the ideas, inspirations, and special talents that we often find in unusual places. And when we are patient enough to discover the sound of a brilliant innovation.