The Importance of Experiments

Greetings. Most of us are familiar with the world of school science fairs. We participated in them as children, and look forward to attending them when our kids are old enough to test the laws or the boundaries of nature. At their best, and even their worse, science fairs provide the opportunity for inspired and curious young minds to put learning into action by following a logical process of discovery around a subject of interest. If this sounds like something that might make sense in your company or organization, don’t lose this thought because we will come back to it in just a moment.

Recently I had the great joy of attending the science fair at our son Noah’s middle school and spending an evening wandering through hallways and classrooms where the scientific method and America’s future seemed alive and well. Young people enthusiastically explaining their ideas, why they chose to work on them, the hypotheses they pursued, and the results of their well-planned or even last-minute investigations of biology, chemistry, physics, and a host of everyday challenges that might lend themselves to new and innovative perspectives. Noah, in keeping with his love of sports and animals, decided to test whether humans or dogs worked harder when they ran. To do this, he had five friends run a set of sprints and measured the change in their heart rates as a result of vigorous exercise. He then had our new dog Vincent and a friend’s dog run their own set of sprints, throwing a ball just the right distance to copy the humans and then measured the change in their heart rates. It helped that the dogs where inclined to retrieve. And he concluded that humans work harder than dogs when running the same distances.

One of my favorite projects was an awesome invention by a seventh grader named Gregory who decided to explore behavior modification in dogs. As many of you know I adore dogs, but I realize that they are not without flaws. One particular issue is the reality that their pee can destroy a lawn. And Gregory was seeking to solve this challenge with a creation he calls the “Furinal.” Quite simply, his invention is an elaborate garden urinal designed to get dogs to relieve themselves in a designated place by offering the inducement of a treat. When a dog goes to the bathroom in this device it sets off an electrical and mechanical chain of events that results in a treat or food being dropped into a small bowl for the obedient hound’s enjoyment. While the details might require a bit of tinkering, the invention was clever and practical…though I’m not sure if it will also require a dog psychologist at the outset. 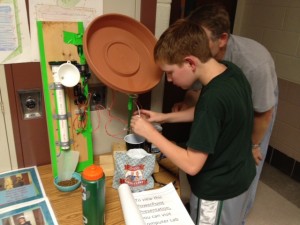 All of which suggests the importance and power of experimentation tied to our innate ability to be experimenters. Yet how many companies and organizations consistently ask all of their people to experiment or test new ideas? And how many also create regular events to shine a spotlight on everyone’s ideas and everyone’s attempts to learn more and make a compelling difference?

Not many at all. Instead most of us believe that innovation is the domain of a limited number of people who, by virtue of their roles or their training, are best suited to creating breakthroughs. Rather than inspiring everyone to give it a go.

We win in business and in life when we create a culture of experimenting. And when we take the simple idea of a science fair out of the classroom and into the rest of our lives.