Lessons from “The Greatest”

Greetings.  This week while I was working with a customer in Louisville (pronounced “Loo-ville” by many of the locals), Kentucky, I had the opportunity to visit the Muhammed Ali Center which opened in 2005.  The Center is dedicated to exploring the life and legacy of a man who rose from the segregated streets of this city become the world’s most renowned and recognized boxer, and who later devoted himself to promoting hope and peace for disenfranchised people around the world.

Born as Cassius Clay, Ali would become the Olympic and World heavyweight boxing champion and bring a remarkable sense of skill, flair, and poetry to this somewhat brutal profession.  He called himself “The Greatest” and backed up this claim with an amazing commitment to training and a unique style that no one had ever seen before.  His ability to “float like a butterfly, sting like a bee” marked a dramatic change in the way people boxed, and his pre-fight poems predicting victory brought a sense of humor and energy to his battles.  But he would also gain notoriety for his conversion to Islam and his conscientious objection to the war in Vietnam.  This personal stand would keep him out of boxing for four years during the prime of his career.  And he would become one of the few sports figures to not only transcend his sport but to use his global fame in a wide range of initiatives to help the poor…engaging world leaders, creating constructive dialogue, and providing food, medical supplies, optimism, and the chance for healthier and more hopeful lives.

At the heart of Ali’s life and work are six “core” principles:

Confidence – Belief in oneself, one’s abilities, and one’s future.

Conviction – A firm belief that gives one the courage to stand behind that belief, despite pressure to do otherwise.

Dedication – The act of devoting all of one’s energy, effort, and abilities to a certain task.

Giving – To present voluntarily without expecting something in return.

Respect – Esteem for, or a sense of the worth or excellence of, oneself and others.

Spirituality – A sense of awe, reverence, and inner peace inspired by a connection to all of creation and/or that which is greater than oneself.

These are principles worth thinking about in the work that all of us do and in the rest of our lives. 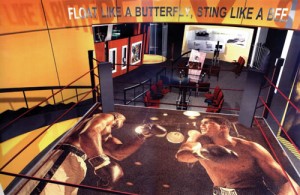 We win in business and in life when we reinvent the very nature of our work.  And when we choose, in following our core principles, to make the world a better place.