Greetings.  Today would have been Rosa Parks’ 100th birthday and it offers an opportunity to think about not only her courage in the face of bigotry and narrow-mindedness, but the keys to  creating a world in which we value the contributions of everyone.

In December of 1955 Ms. Parks, a forty-two year-old seamstress on her way home from work, changed the course of American history when she refused to give up her seat on a public bus in Montgomery, Alabama.  At the time, local law stated that the first ten rows of the city’s busses were reserved for white people and that black people could sit in the remaining rows…but only if a white person didn’t want their seat.  In laying claim to her dignity, Rosa Parks sparked a 386-day boycott of Montgomery’s transit system by the city’s African American citizens who were 75 percent of its riders.  It’s hard to imagine that this was our world only 58 years ago, and even harder to imagine that so many prejudices still persist today.

And that includes prejudices that exist in many workplaces.  Prejudices that keep us from ever tapping the ideas and real talents of all our colleagues.  Because whether we realize it or not, our companies and organizations treat lots of people like second-class citizens…assuming in an instant that their roles, backgrounds, training, and experience limit their ability to make a real difference.  Assuming that the big challenges we face can only be solved by the smart folks in the big offices and the clever people from the best schools with the most important degrees.  While ignoring the input of people who might have a very different and potentially powerful take on the things that matter most.  People who might see things in new and more valuable ways if only we took the time to ask and involve them.

But what if instead we committed to creating organizations that challenge all of our people to take a stand?  And that were willing to be more open to the different roles, backgrounds, training, and experience they brought to the table.

Wouldn’t we all be more innovative and better off? 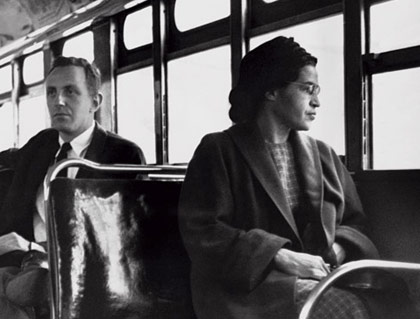 We win in business and life when we stand up (or sit down) for everyone’s right to be heard and to be viewed as someone who matters.  And when we seek to find the genius in everyone around us.